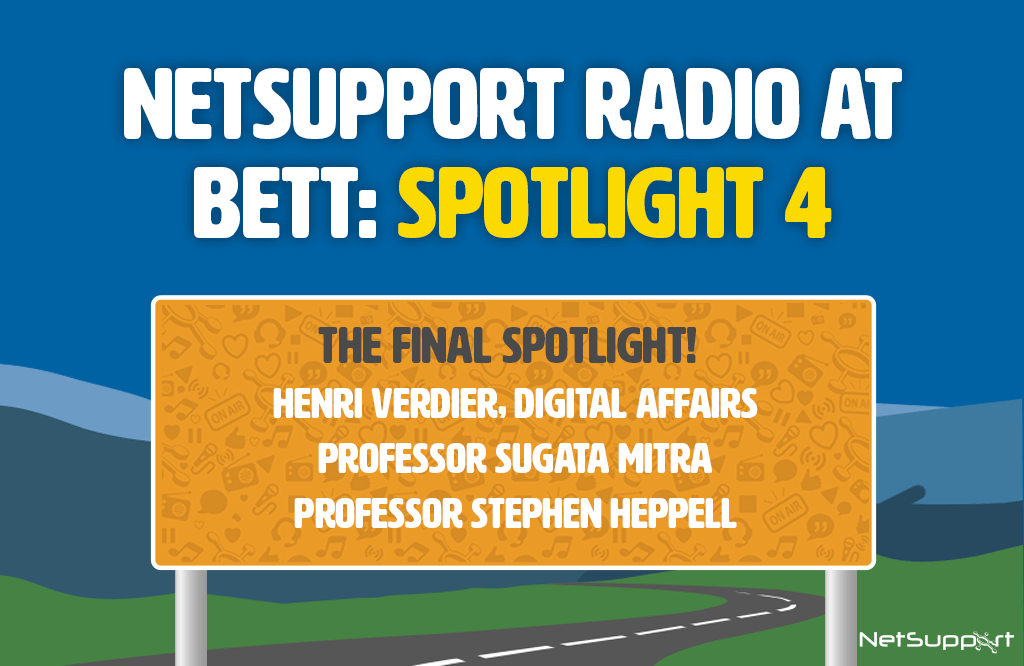 In our final spotlight on NetSupport Radio at Bett 2020, we learn about digital diplomacy, the power of grannies – and plants…

Henri Verdier, Ambassador for Digital Affairs for the French Ministry for Europe and Foreign Affairs

We were delighted that Henri Verdier took the time out of his busy schedule to talk to NetSupport Radio! As an entrepreneur who began by founding three internet businesses, Henri has worked in across various areas of digital and has held many advisory roles at a strategic level. Now, he works with the state to nurture small entrepreneurial companies, as well as in the areas of digital diplomacy and internet governance. He talks to Russell Prue about his experience, thoughts and goals for the future of digital innovation in Europe.

NetSupport Radio was also honoured to speak to Professor Sugata Mitra! He spoke to Russell Prue ahead of his keynote talk at Bett about the future of learning and chatted about the findings from his well-known project to prompt children to learn together around a single device and find answers online. “Essentially, a [self-organised learning environment] is about collaborative learning around the internet. The collaboration isn’t driven by a teacher or an institution; it’s driven by the children themselves,” he explained.

Another project he described was the Granny Cloud, where the ‘granny’ figure inspires learning by admiring a child’s current achievements and then encourages them to find out more, rather than using rules and discipline that may constrain their thinking.

NetSupport Radio was delighted to chat to Professor Stephen Heppell and hear all about the Learnometer boxes that, after five years of prototyping, are now available as a product for schools.

The boxes monitor classroom environments to help schools create optimal environments for learning by monitoring light levels, Co2, humidity, air pollution and much more. In addition, Professor Heppell talked about the importance of knowing the best foods to eat before taking an exam – and getting the right furniture in classrooms that doesn’t restrict the students and works with them.

He also described the new Bring Your Own Plant initiative that is taking off in schools, which is beneficial not just because plants absorb the Co2 in the room, but because they prompt learning about how to care for them – and more.