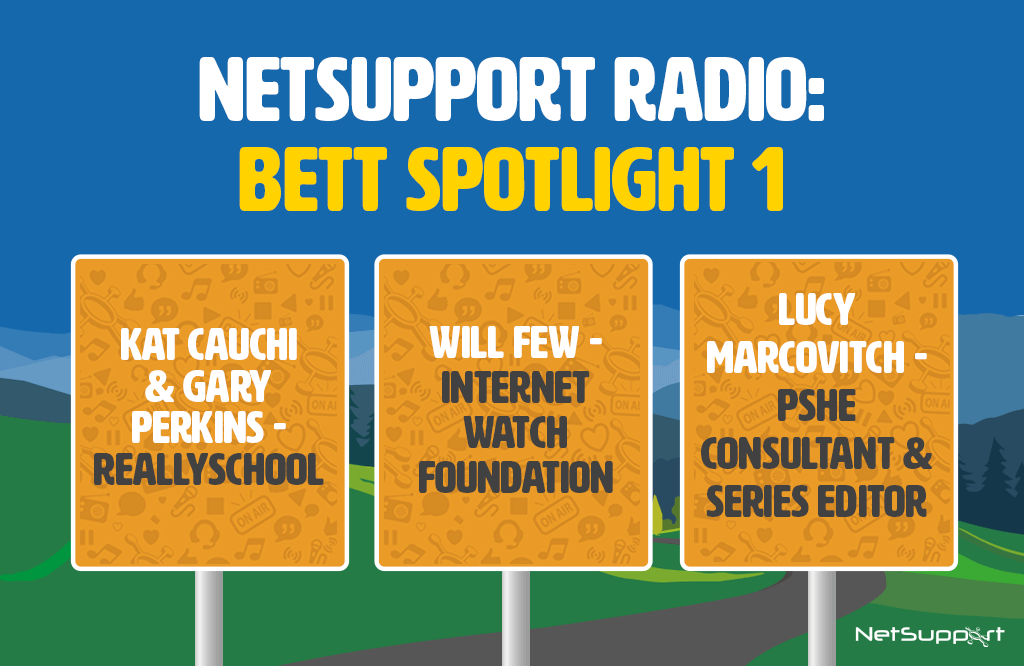 NetSupport Radio (powered by Anderton Tiger) was delighted to be the official broadcaster at Bett 2020. We spoke to lots of very interesting people about all kinds of education-related topics and, for the next few days, we’re going to give you an overview of a few of them!

Kat Cauchi and Gary Perkins from ReallySchool
Kat is the Product Manager for primary observations and assessment solution, ReallySchool, from NetSupport. Gary Perkins is an experienced independent consultant (having worked at all levels from class teaching, being a head teacher, a local authority adviser to being an Ofsted inspector – and more!), who is working with the ReallySchool team on its development.

Speaking to NetSupport Radio on Day 1 of the show, Kat commented that they’d already had great interest in ReallySchool, with visitors saying it looked simple to use and that it ticked lots of boxes,  which makes it really useful in the classroom.

She also explained that over the last year, ReallySchool has had a lot of development and Gary has been instrumental in that; providing fresh eyes to look at data and school needs to take it to a level that has optimum use for leadership teams – as well as, most importantly, keeping it focused on the child and teacher in the classroom. Gary agreed, saying, “There are many products of this type that don’t do what we do, as they put the teacher at the centre rather than the child. The development is from the child upwards; that’s the starting point.”

Will Few, Internet Watch Foundation
The IWF does hugely important work to remove images and videos of child sexual abuse from the online space. It’s a massive problem, but their vital work helps victims from being re-victimised each time another person views their image.

Talking to Russell Prue, Will explained that anyone can report inappropriate images to them directly, via their website – anonymously, if preferred – and that the IWF is one of the only organisations outside of the police force that can proactively search the internet for this kind of material.

Commenting on how the images are generated, he said that there are lots of different ways it can happen, but the incidence of self-generated content has been growing steadily since 2012. Worryingly, it occurs in the home environment – where a child should be safest.

Lucy Marcovitch, PSHE Consultant and series editor for Discovery Education
Lucy chatted to NetSupport Radio about the challenges for primary teachers who don’t feel confident or who aren’t trained what to teach in PSHE lessons – the vocabulary they need to use, how to answer tricky questions, and so on. She said it’s about making teachers aware of the words they need to be using to help children talk about their own bodies, keep themselves safe and understand relationships.

She explains that one of the specific challenges for educators is the difference between how they grew up and how today’s children grow up and understanding how social media shines a spotlight on their world. This brings a lot of pressure in matters like body image, identity, perceptions of other people – is a whole new level that many teachers didn’t have as they grew up and find hard to understand now.